Cinemills newest product was recently revealed at this years NAB Show, 2012, Las Vegas, NV. This lighting fixtures adds to the already growing amount of LED selections from Cinemills and LEDZ. The company is always on the cutting edge for the latest lighting technology by incorporating suggestions and feedback from the professionals in the field. Research and development are one of Cinemills strengths in providing top quality products and services.

Posted by Cinemills at 3:19 AM No comments:


Recently, Cinemills Cinesoft Luminaires was used in a new car commercial. The light fixtures where rigged overhead from the subjects, and color balanced to emulate night scenes.

The Cinesoft has features that allow the user to dial in color temperature from 3800-5600 kelvin. Additional gels can also be applied, to the accessory frame, to create a specific look.

In addition, the units only consume 1.5 A power, in the house hold circuit, you can plug in up to eight units without popping any breakers. See video below for more specs on the fixture. 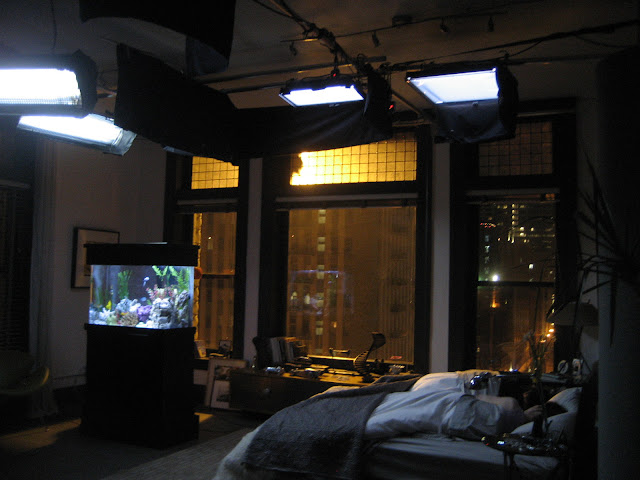 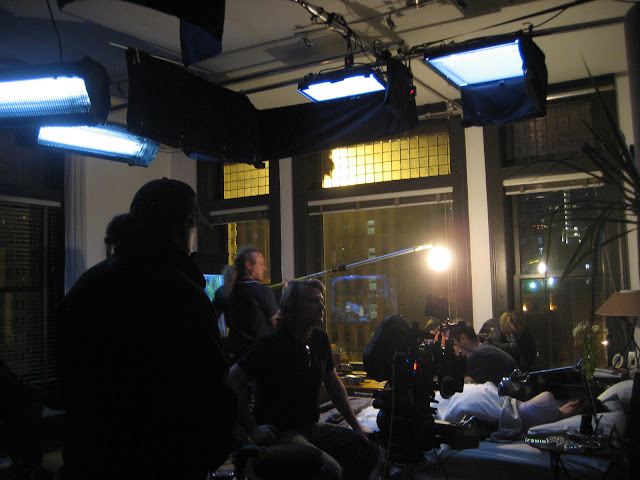 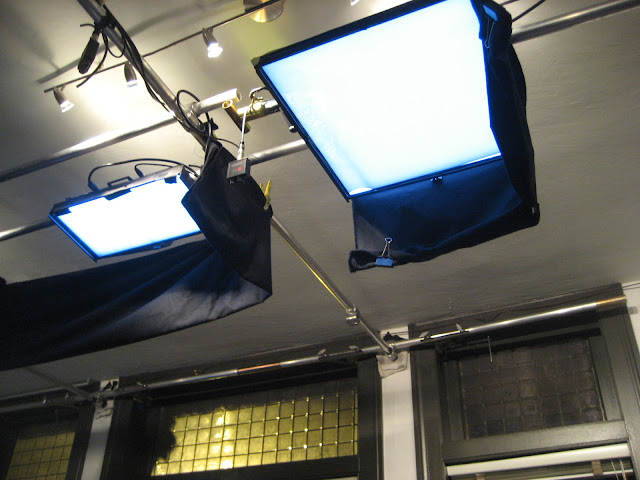 Cinemills Fact: We Have 24 LED Lights Plugged In One Power Source, At Our NAB Show Booth

Cinemills is currently showcasing several LED lights at this years NAB. From LEDZ (Mini Par, Brute 3,  Brute 9, Brute 16, Brute 30) Cinesoft, Razor, and Cinedisc. Powering all the lights we have; four power strips connected to the LED lights, split to two 20 amps services, and out to one main power source.

Mike J. Walsh, Chief Lighting Technician, pre-designed the layout for the booth at the Cinemills HQ. 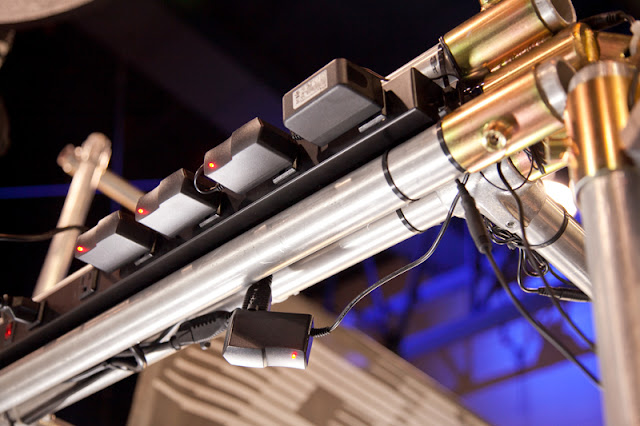 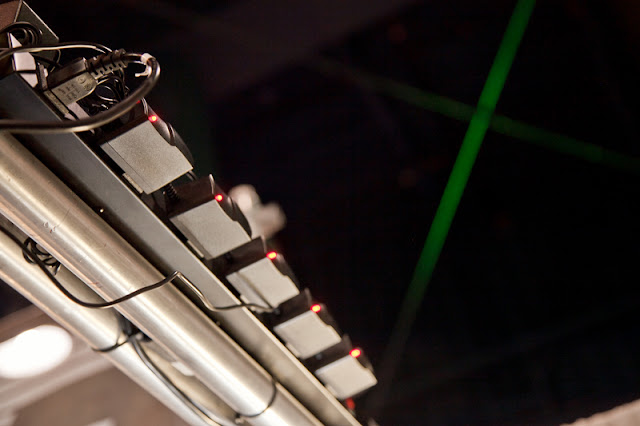 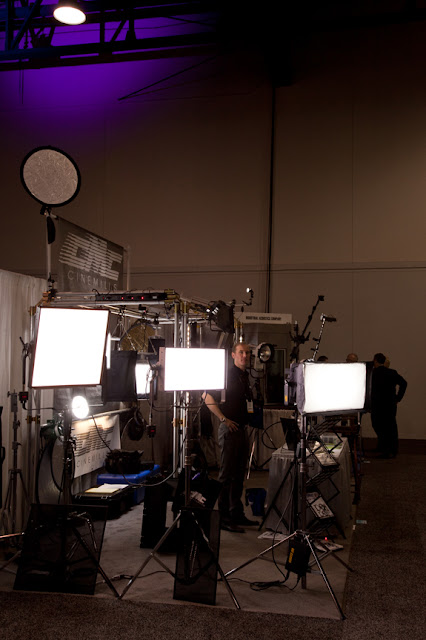 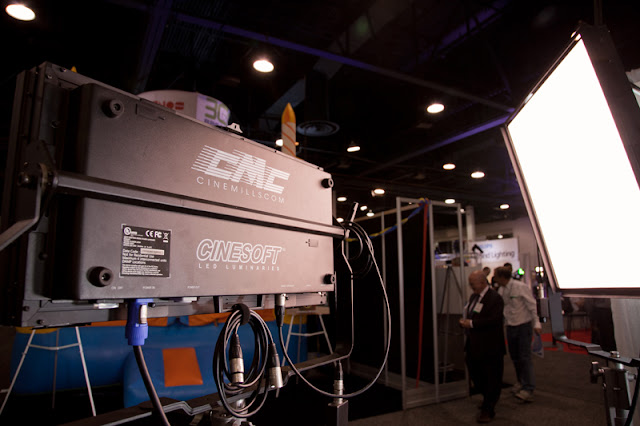 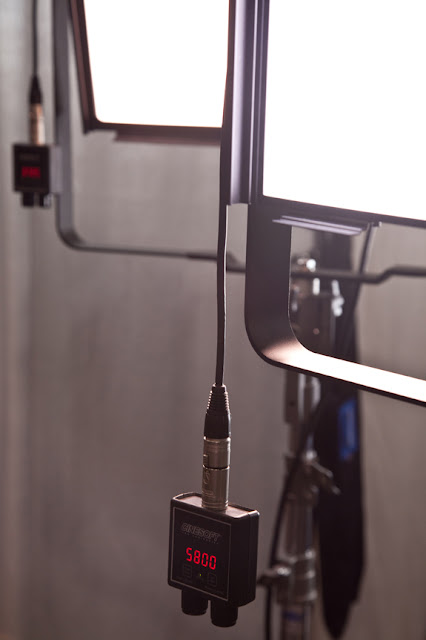 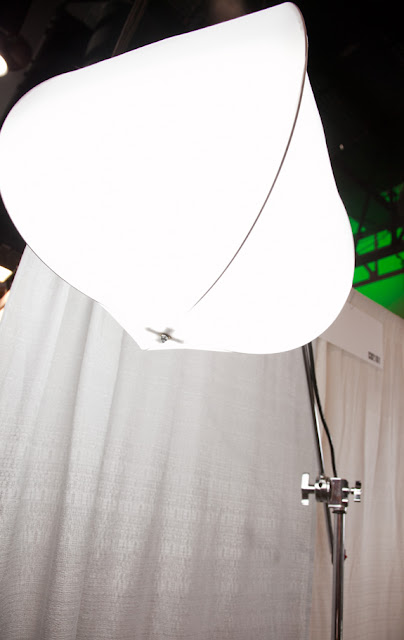 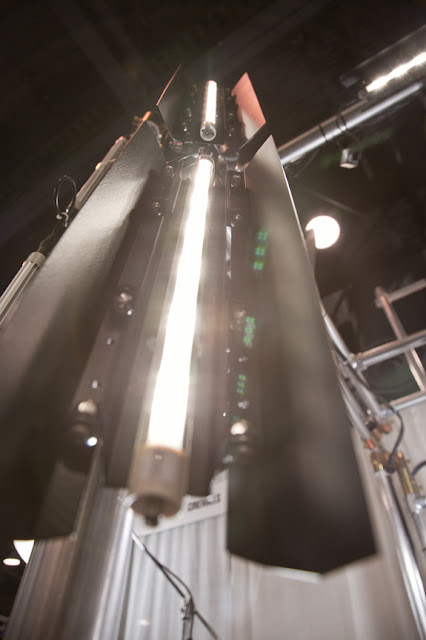 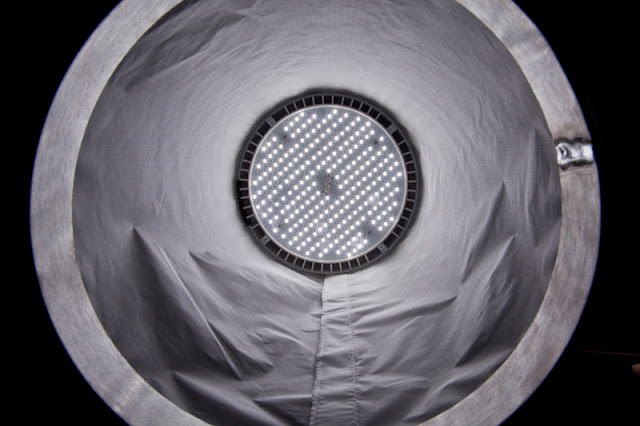 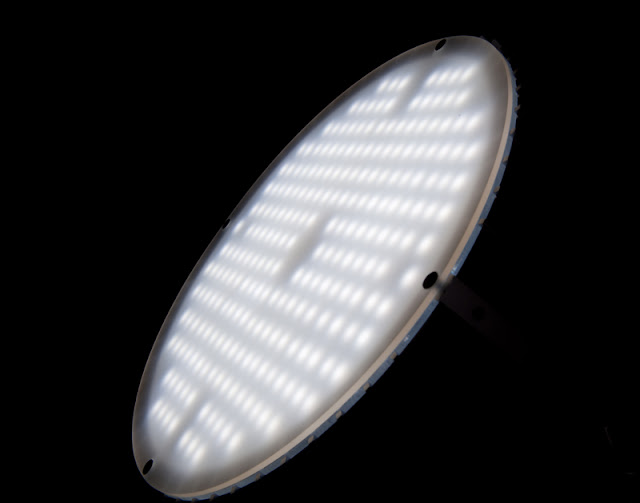 Doug Farris and Duane Hanakeawe, from VSO Media, just stopped by the Cinemills booth C2161, at this years NAB Show. They briefly told their stories about previous obstacles, and now, found new solutions to light their scenes and projects with the Cinemills LEDZ line.

Doug and Duane are happy to pick up four Brute 6 lights from our booth.

VSO Media was originally started by two media professionals who came together to help provide post-production services for a television pilot produced by Balance Vector Productions. Once the decision was made to go ahead and produce a whole season of the show these two men decided to create what became known as VSO Media. The show went on to be titled “Coolfuel Roadtrip” and has since aired in syndication, the Discover Science Channel, the new Planet Green channel and internationally on the Outdoor Life Network and Discovery India.

Backed by one of the founder’s extensive Production experience VSO Media has grown from its Post-Production beginnings to become a full service production company. As the company expanded its service offerings the company needed to expand its facilities as well. VSO now operates three video editing suites, an audio post-production suite, recording studios and rehearsal spaces, all within blocks of the Pacific Ocean in Santa Cruz’s beautiful west side.

See samples from their work. 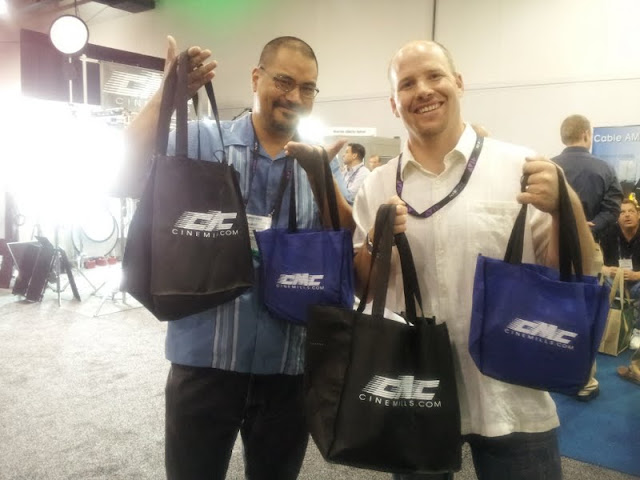 Posted by Cinemills at 3:29 PM No comments:

Here's a preview of the new PAR-NEL 1200/1800W Daylight design, being featured at this years NAB Show, in Las Vegas. 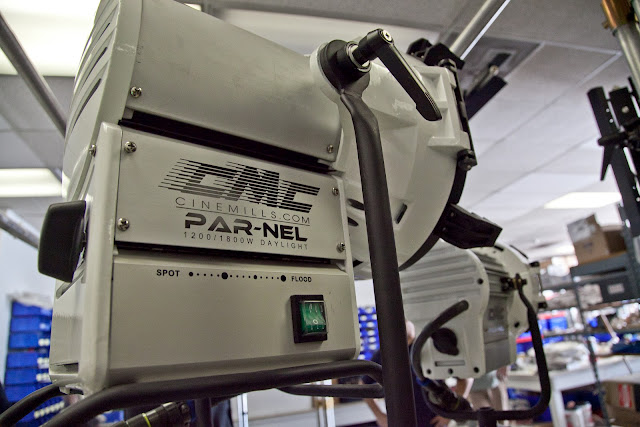 Posted by Cinemills at 7:47 PM No comments:

Here is Cinemills' latest flier for 2012. Plus,we have new Eco-friendly lighting products to reveal at this years NAB Show. More details to come... 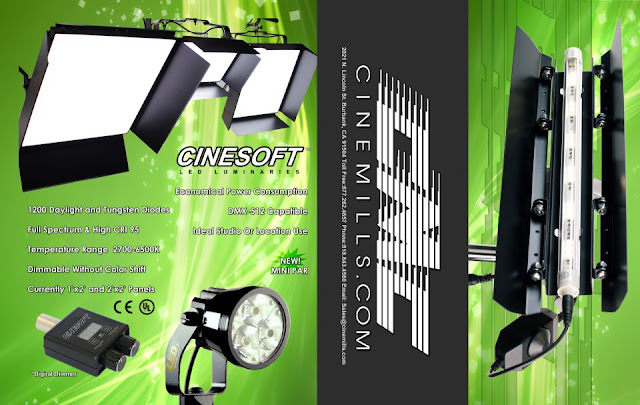 Get up-to-date with Cinemills news, follow us on our growing social media sites. See you there!

Posted by Cinemills at 10:30 AM No comments:

Cinemills LED Panels Installed In Church Of All Nations Auditorium 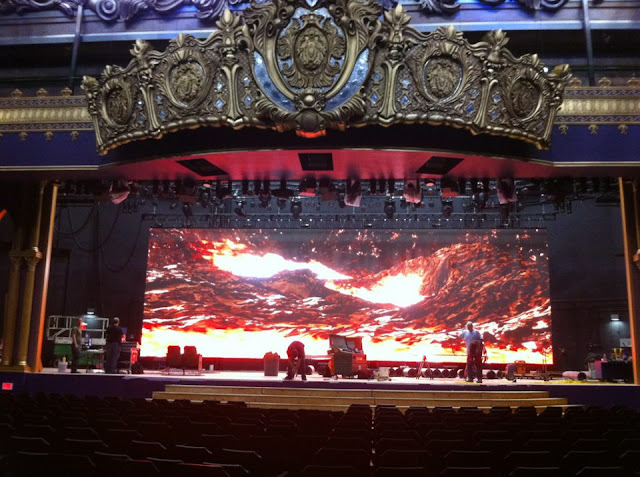 Cinemills recently provided all the LED Panels for the 2,000 seat Church of All Nations auditorium. A must-see highlight for guests visiting the Holy Land Experience. This beautiful state of the art facility, features spectacular dramatic productions, such as, live presentations of, “Behold the Lamb”. The powerful reenactment of the passion and crucifixion of Jesus, and “We Shall Behold Him,” the glorious depiction of his resurrection and ascension to heaven. There are wonderful, live Praise the Lord programs, with the best of today's ministry and music guests, plus praise and worship concerts, church and baptismal services . . . and more!

Posted by Cinemills at 8:32 PM No comments:

Often times gear is misplaced, stolen, or hard to identify. Cinemills offers a complete customized solution for all of its lighting fixtures by branding your color and logo. Now with the "Customize it" option, your gear is readily identified with a quick glance.

Cinemills recently assembled, and customized, several Silver Bullets for one of the major studios. 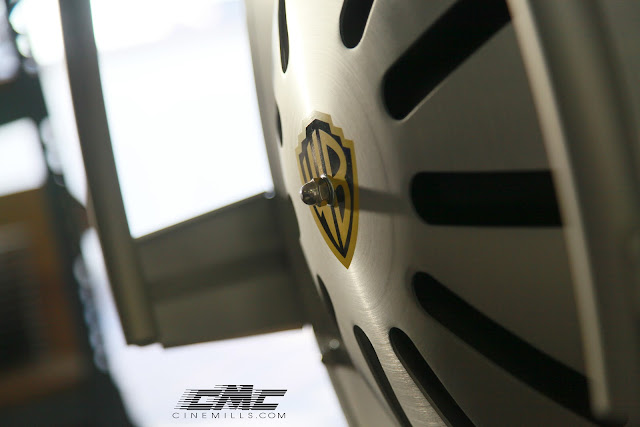 Also adding a professional and aesthetically pleasing look that compliments your presentation. This is a popular request amongst studio lamp docks, rental houses, and owner/operators. Send us your a High Resolution logo and desired casting color and it will be so.

Posted by Cinemills at 8:01 PM No comments: