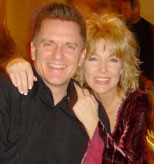 “I have produced several motion pictures including the #1 theatrically released independent film of 1999, “The Omega Code” and recently the top 10 epic picture with Peter O’Toole and Omar Sharif, “One Night With The King.” I would not think about anything else but request Cinemills lighting fixtures because of its dependability and affordability.”
-Matthew Crouch

Mr. Crouch also produced other Theatrically Released Films such as, "Megiddo" , the sequel to the "Omega Code" and the film "The Champion". Mr. Crouch served as Vice President of Trinity Broadcasting Network (TBN, the largest group owner of television stations in the world), where for 15 years he oversaw all aspects of production for both the film and television divisions. Matthew along with his wife Laurie are frequent hosts on various programs that air weekly throughout the world on TBN. They currently live in Hollywood where they continue to raise their 2 boys Caylan and Cody.