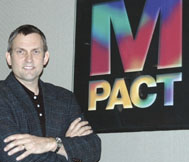 “In my business, lighting is one of the most important element to the success of my productions. Cinemills has provided me with the best pricing, quality and service and I won’t buy anything from anyone else without giving Cinemills the opportunity to review what I need first.”

Tom Newman started out as an actor, playing Jesus both on the screen and on the stage. In addition to portraying Jesus in Michael W. Smith’s widely popular “Secret Ambition” music video, Newman captured Christ’s likeness in the world renowned original musical production: The Masterpiece: A Toymaker’s Dream.

Impact Entertainment has produced numerous films, including the inspirational Christmas Child, which aired on Lifetime Television network, and co-produced the recent box office hit, One Night with the King. In 2006, Impact released the highly acclaimed, End of the Spear, In December 2006, Impact Entertainment announced that it was partnering with The Weinstein Company to produce and create a series of faith-based feature films over the next several years, offering Tom and Impact an opportunity to produce Christian entertainment with Hollywood quality.